It might seem somewhat crazy to travel 7 1/2 hours by train to a festival just to see a band playing live which hasn't even released an album yet, but in this case it turned out to be the absolutely right decision. 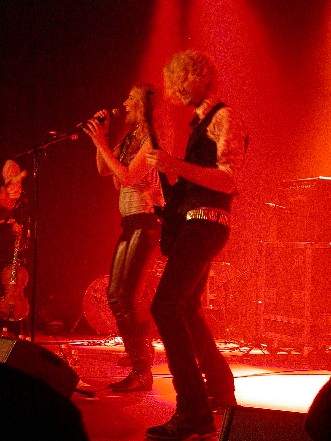 It had just been about a month before the concert that someone had recommended the Norwegian folk rock band Bergtatt to me. After listening to the songs on their myspace-page I was immediately surprised in a positive way - something which, unfortunately, happens very rarely nowadays.

The music reminded me of two of my favourite Scandinavian folk rock bands, namely the (defunct) Norwegian band Gåte and the Swedish band Garmarna, which however does not mean that Bergtatt sound like a copycat of either of them.

About three weeks before the concert, I read on Bergtatt's myspace-page that they'd play at Nordklangfestivalen in Sveits on February 7th. Since typing "Nordklangfestivalen" and "Sveits" into Google gave zero hits, I tried "Nordklangfestival" and "Schweiz" instead and thus found out that the festival was going to take place in St. Gallen. After checking the train connections and the location(s) of the festival, I spontaneously decided to travel to this festival. The fact that the concert would take place on a Saturday, thus I didn't have to take some holidays to attend it, made my decision somewhat easier as did the fact that the band features two attractive ladies, namely vocalist Marianne Lia and violinist Marie Forr Klåpbakken.

Luckily, on the day I travelled to St. Gallen there weren't any serious delays, thus in spite of the fact I had to switch trains three times, I didn't miss any of them.

After my arrival in St. Gallen, I checked in at my hotel and then I checked the way to the venue where Bergtatt would play, which was just a few hundred metres away from my hotel. 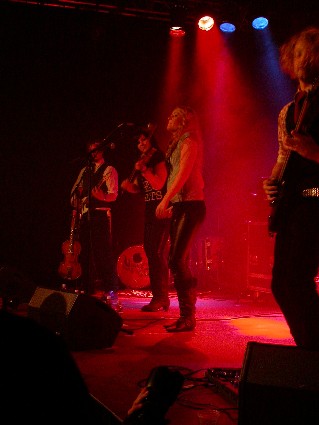 After having something to eat, I wanted to go to the bureau of the festival organisation to fetch my festival-pass (which was actually just a wristband). On my way to the bureau I came past the cathedral where the Mass had just started. Since it was still early - half past five - I decided to attend the Mass. After it was over and I had just left the cathedral to go to the bureau, I saw five people coming along the street towards me, three guys and two young women. I had seen the faces somewhere before and when they went past me I heard them talking in Norwegian, so I turned around and asked them if they were Bergtatt from Norway. Of course, they were. It was just a first short encounter (since they were on the way to their hotel to practice a bit), but one which would make it easier to recognize each other at the concert.

At about half past seven I went to the Grabenhalle - one of the four venues of the festival and the one where Bergtatt played.

The first band which started at eight o'clock were Montys Loco from Sweden. While I somewhat enjoyed the live concert, their music was not something I'd listen to at home. 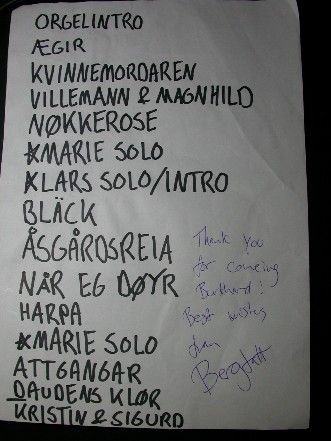 Finally, at about a quarter to ten, Bergtatt entered the stage starting with an organintro and their song "Ægir" which I already knew from their myspace-page. During the first half of the concert, I couldn't concentrate on the music as much as I would have liked to, since I was taking pictures. However, I really enjoyed what I heard, some songs/parts which were new to me even more than what I had already heard on their myspace-page. In one or two songs - I don't remember the titles, since I hadn't heard the songs before - the organ sound reminded me of prog rock from the seventies. I wouldn't mind to hear more of this on future albums, since I really like this sound (though I've never been a huge fan of prog rock). I also enjoyed the guitar solos on some of the songs very much. I hope there will be more of this kind on future albums. Vocalist Marianne has a good and powerful voice and she is - just like violinist Marie - a feast for the eyes.

During their set, Marie also played two instrumental pieces on her violin which seemed to go down very well with the crowd - as did the entire set. I'd say there were an estimated 200 to 300 people watching Bergtatt's performance. During some of the heavier metal-like songs two metalheads in the front row seemed to go crazy, screaming lines like "Norwegian death and black metal", starting some headbanging and even some air-guitaring. 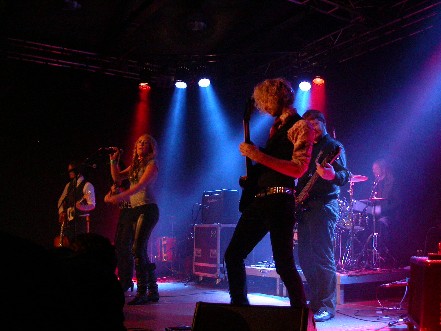 When the last songs were played, some people were also dancing in front of the stage. The crowd was obviously having a lot of fun as did the band. After playing for about an hour, Bergatt had run out of material, thus when they came back on stage for an encore they played the song they had started their set with, "Ægir", again. Unfortunately for the band, the concert took place about two weeks before the official release of their debut album in Norway. Neither CDs nor any kind of merchandise were available. But I think that those who really enjoyed the concert - and there were obviously quite a lot of them - will find ways to get hold of a copy of the debut album once it has been released. 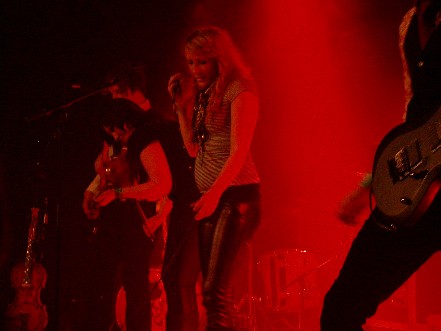 After the concert, I got the chance to talk to guitarist John Stenersen for at least half an hour (or was it more?). It was an interesting conversation about music and talking to someone who also shares at least some of your own musical interests is always fun. It turned out that John is a big fan of Mari Boine, thus the special gift I had brought along seemed just perfect.

After the last band Vincent Van Go Go from Denmark, whose mixture of Reggae- and Electronic music wasn't really my cup of tea, I was invited backstage and also got a chance to talk to the other members of Bergtatt and found out that each of them also likes at least one of my favourite artists. E.g. organ-player Lars Henrik Johansen, who by the way happens to understand and speak German quite well, likes Kari Bremnes, drummer Vegar Carlsen seems to be the old school (thrash) metal fan in the band - albums and bands like Holy Moses' "Finished With The Dogs", Forbidden, Testament, Death Angel, Mekong Delta and Anacrusis' debut (he hadn't heard any of their other albums - I'll have to change this) were mentioned in our conversation. Bassist Jens-Erik Aasbø, who also sings bass (though not in the band - yet), revealed himself as a huge fan of Emma Härdelin (Garmarna, Triakel) and The Third And The Mortal's "Sorrow" and "Tears Laid In Earth" and guitarist Rolf-Erik Solstad Karlsen agreed with me that Metallica's "Ride The Lightning" is still an execellent album. As far as Marianne and Marie are concerned, I'll hopefully get another chance to find out, if we also have any favourite artists in common.

At about a quarter to two, the band decided to head for the artists' lounge and their drummer invited me to come along, so we could continue our - at least from my point of view - interesting conversation about our favourite music. 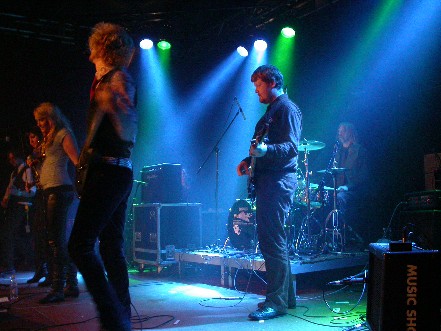 Maybe also as a consequence of the fact that they had been enjoying some beer, wine and other alcoholic drinks, I got to witness an impromptu table drumming session and to hear a canon of the to me hitherto unknown German song "Mein Hahn ist tot" as well as the Norwegian version of "Alle Vögel sind schon da" (don't know if there's also an English version of this song) and an acapella rendition of "Lay All Your Love On Me" (just the chorus) presented by Marianne and Marie.

At about four o'clock in the morning, when the artists' lounge had to close and the band members decided to go to another place where beer was still available, I decided to go back to my hotel, since my train back home was about to leave in about six hours. My last contact to one of the band members was a hug from Marie - can you wish for more?

Unfortunately, I didn't manage to get any proper sleep, just about 3 1/2 hours of snoozing, partly due to the fear to wake up too late and thus miss my train and partly due to all the things going round in my head because of impressions of the concert and probably even more of the interesting conversations I had had during the four hours before.

Even though I only had to switch trains once on my way back, thanks to a failure of the train engine, my way back home lasted 9 instead of 8 hours. In spite of the fact that I'm feeling very tired now as I'm writing this, I have to say that this experience - not just the concert, but perhaps even more the intense conversations about music with like-minded people - was definitely worth the total of 16 1/2 hours of travelling within two days and hardly getting any sleep in between.

To sum it up in Norwegian: Det var en grisefantastiske opplevelse som jeg aldri skal glemmer! (I hope I got this sentence right.)

And here's a small gallery from the concert: 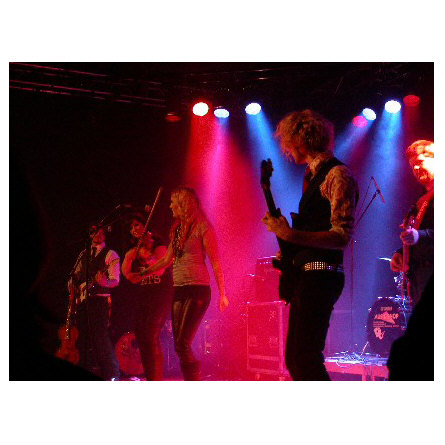 Listen to Bergtatt at Myspace